Hey dear followers its been 3 years irfanistan was using this wordpress.com finally a day come when irfanistan buy own domain and covering new exciting stories for you, so its a requested to all of you to use below link to get updated all the time,

Thank you wordpress.com for being loyal with me

By watching this brilliant ‘Salman khan’ mega blockbuster movie “Bajrangi Bhaijaan’ realize us that Love has no boundaries between two countries, people, relationship, or religion. 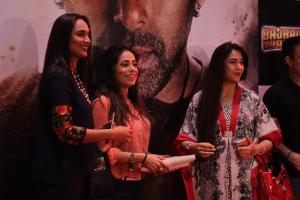 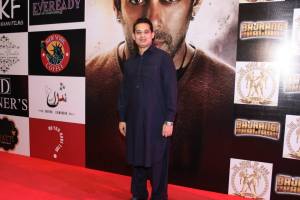 An event was organized by THOR (The house of RanaAsif) at atrium mall where many celebrities attended the private premier of Bajrangi Bhaijaan. Star studded red carpet was filled with new excited faces and upcoming new fashion fraternity bloggers were also spotted there aswell, everyone was so excited to see Salman Khan again on big screen after his controversial case which was going on in court after releasing on the bail, yes ! it was the perfect time for salman and his fans to show solidarity and sympathy to complete his Film Bajrangi bhaijaan and set to release this movie on Eid all over the world specially in india and Pakistan but the  issues raised in Pakistan  that bajrangi Bhaijaan should not be release in Pakistan  because two major films were also releasing on Eid ul Fitr  Binroye & Wrong NO, both Pakistani movies released successfully but bajrangi bhaijaan faced many hurdles to launch in Pakistan because of Censor board , ‘Wrong No’ director ‘Yasir Nawaz’ was not in the favor of Bajrangi Bhaijaan to release in Pakistan, he wanted that Pakistani ‘Awaam’ should watch his film and support Pakistani films as we are in revival stage. Whereas Famous Qawal Amjad sabri also stood up for the copyright issues regarding Adnan sami qawali “Bhar do jholii merii” which he sings in this film, and now he wanted to go Mumbai to file a case against plagiarism of his Qawali that’s why its not showed in a film, there were some scenes which weren’t shows in BBJ 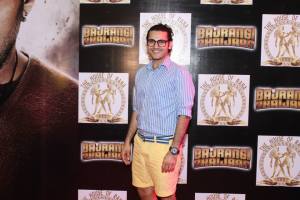 Success doesn’t come easily it has to face hurdles, difficulties and many problems, thats what Bajrangi bhaijaan faced it, and now its earning more than crores, can’t say exact figures but yes Salman khan proved himself once again that his own Brand “BEING HUMAN” is still alive in every heart of  human  who want to help others. I’m not going to disclose story of bajrangi bhaijaan as it is worthable to watch not only because of Indian or support but yes, it’s a right of every viewers to watch good quality content or some reality based films which has some new stories, content to show, this is the biggest example for our upcoming directors that if your story your idea or what every you present  publicly  make sure it should have some unique elements which viewers can relate themselves . 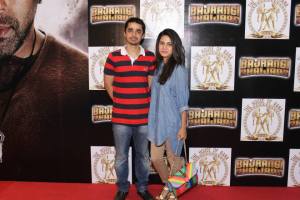 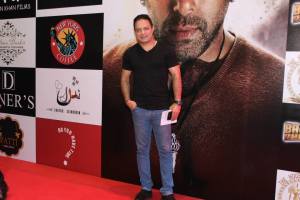 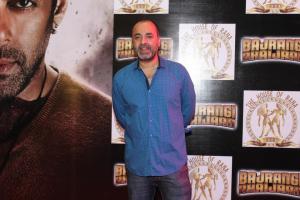 In past many Pakistani directors proved themselves that they are best by showing their films like Shoaib mansoor  (Khuda k lea, Bol) Nabeel Qureshi ( Na maloom Afraad) Mehreen Jabar(Ram chand Pakistan)Afia Nathanial (Dukhtar) and list goes on, but the point is viewers will definitely watch “Achii or meyaari films” we are not in revival stage we are already on growth stage as many movies are releasing in this year which shows that our film industry are growing and the best part is new comers/directors  are also active participating in it, so giving excuses or giving patriotism remarks will not effect to viewers  at all, just do your best and leave on God try to make movies not controversies try to improve your thoughts not pointing others work, try to bring something new for Pakistani Awaam, try to develop your infrastructure not to give excuses, your failure gives you experience so you can improve next time. 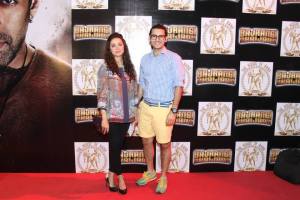 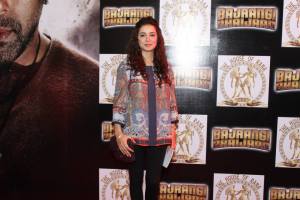 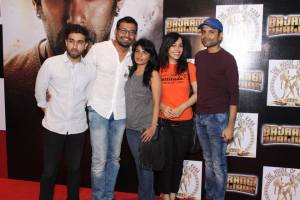 We definitely support Pakistani film industry if they support their own film fraternity.

All the best for our upcoming Pakistani films. We are expecting so much this time.

Director of ‘Wrong No’ Yasir Nawaz left message on social media to his viewers,fans and he requested to our prime minister Nawaz Sharif to watch our pakistani Film Wrong No rather than watching bollywood movie Bajrang Bhai jan,

well to my point of you, as our film industry revive and develop by their own, and many director brings their own film in Pakistan with out any support of government  if content or story is good, believe me people do watch Pakistani movies as many others director did, like shoaib mansoor for khuda k lea, Bol, & Nabeel Qureshi for Namoolm afraad, so be confident what you present and never feel insecure that your film is not going to hit box office, no doubt Wrong No, is going to make business as compared to other Pakistani movies but we should not forget that there are so many people who do watch Bollywood films because people spend money to watch entertainment one, and we are hoping from wrong No too.

Just check out celebrities Sound Bite regarding ‘wrong No’

check out what celebrities says about “BINROYE’

Believe me, No one like to go outside  specially after 5pm during Ramadan but those who work outside they actually likes to reach their home before iftar , Karachi is metropolitan city we see after 5pm every body wants to reach  home, mostly people don’t follow rules they break signals to reach home as soon as possible which cause many accidents due to ignorance of law, well Lipton comes up with such a nice concept/market promotional activities  for those who struck in traffic and they find difficult to open their fasts.

As we all know, Junaid Jamshed step in to business since last 3 years back and well maintain his own clothing brand called J. in market, now his another venture which he launched his new outlet store in ilford london, so its a good news for those who live abroad and wanted to wear eastern specially on some big events like Eid, so its a really good opportunity to both that our culture traditional is going to wear western people,

Lets check out the latest images of his shop which he opened in ilford london. 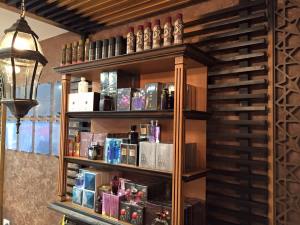 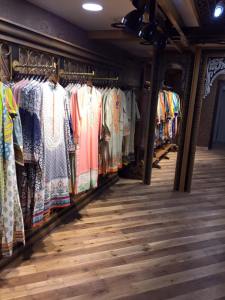 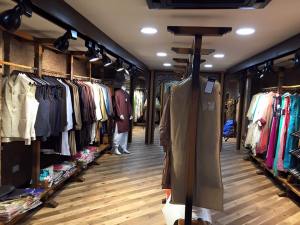 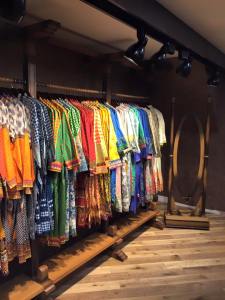 As we all know upcoming comedy debut flick of Yasir Nawaz’s “Wrong No’ is all set to release on this Eid, Many hopes are bind to this movie as we can see WrongNo team is doing marketing promotion activities on every mediums either could be channels /shows/fm or even cinema’s so it makes possible to meet the team, The best part of this film is, you can relate to your self, it is the first Pakistani film which is been made in Pakistan all technicians, makeup artist, shoot, actors, even Grading also done in Pakistan.

If you missed the trailer of Wrong No you will find out the most comedy scenes in it, if not scroll down and watch all the best 5 Scenes of Wrong No.

Who don’t know about famous , elegant batsman popularly and affectionately known as “Zed” (Zaheer abbas) a legendary former cricketer, regarded as one of the finest batsmen produced by Pakistan, recently did fashion shoot for the renowned clothing brand of Pakistan “Gul Ahmed” Photography, Makeup & styling by the Magician Guru Khawar riaz  who knows the real aesthetics sense a single picture of Khawar riaz says thousands of words like in this Eid collection shoot of Gul Ahmed, you can see how beautiful done from choreography to makeup, styling to pose, each picture shows the beauty of fabric, the mesmerizing charm which depicts of Eid celebration.

As we know Eid is just round the corner and you don’t have much time to hustle in bazar for Eid shopping, especially mens don’t like to spend much time when its come to eid shopping, so Gul Ahmed brings latest Eid collection for you all, with beautiful wide range of new designs kurta, shalwar kameez which is essential to wear on First day of Eid, so don’t waste your time and visit Gul Ahmed shop and buy your own favorite one. 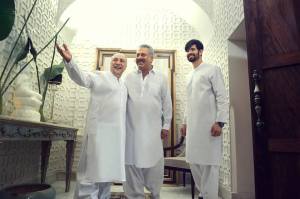 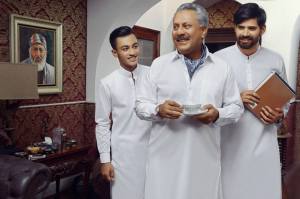 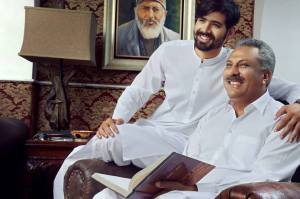